Roman Itineraries on Foot: Squares, Fountains and Palaces of Rome 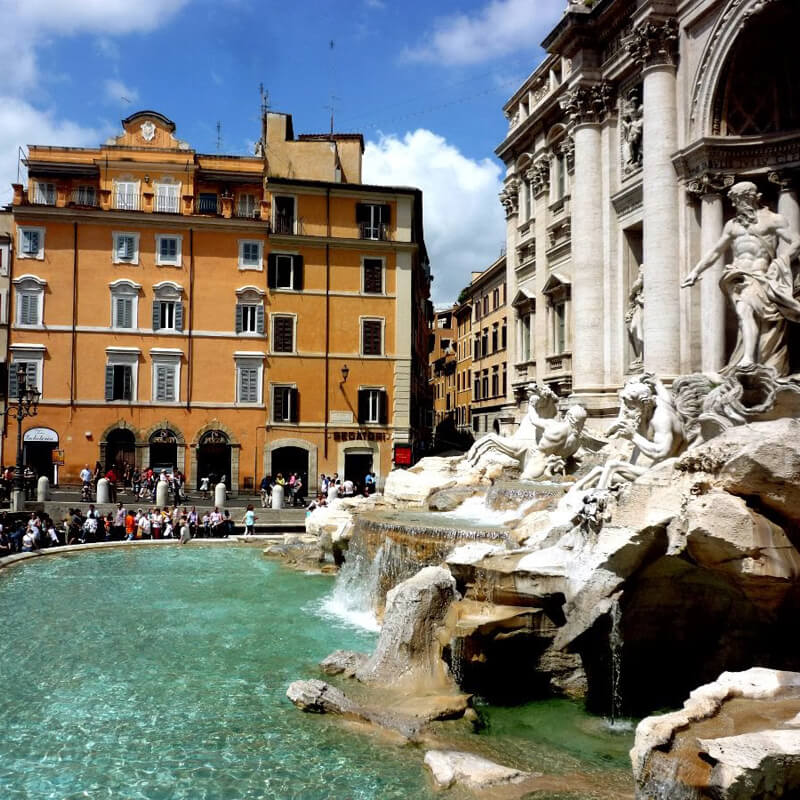 Another appointment with the walking itineraries in Rome suggested by RomeGuideTour, this time we will take you around, always on foot, to discover the main and most famous squares and fountains of Rome. A tour that you can do on your own but that can be more informative and entertaining when discovering more historical and architectural information and the many anecdotes related to the various places in Rome, thanks to a guided tour with an expert tour guide. Are you ready?

First stop
We start from the Quirinale, going down the steps of Piazza del Quirinale or coming from Via del Corso it will be easy to cross one of the many streets that will bring you in front of one of the most famous and photographed fountains in Rome, the Trevi Fountain.

Much has been said about the famous fountain but perhaps you do not know that to complete the construction of this fountain (that lasted for about 300 years), an artist named Nicola Salvi was selected as it seems that he was the cheapest among the artists of some level then in circulation.

We do not know if this legend is true or not, but what is certain is the Trevi Fountain was financed with the proceeds from the lottery game. It should be added that it was not the only tax imposed to finance the work, for example we know that Bernini about a hundred years earlier obtained funding from another unwelcome tax for the Romans, this time the tax on wine.

Second stop
Leaving the Trevi Fountain behind us and crossing Via del Tritone we find another famous fountain, the Fountain of Tritone, a few steps from the Museum of Ancient Art, Palazzo Barberini. If, on the other hand, you want a break and a free multimedia show, you can always go to the Rinascente where at the top level you will find the remains of the virgin water aqueduct and a multimedia reconstruction that explains its history and its uses; moreover, going up to the terrace of the Rinascente you can enjoy one of the best panoramic views of Rome.

Crossing Via del Tritone and la Rinascente you will arrive at Largo del Nazareno, the birthplace of Bernini and the place that hosts the Propaganda Fide Palace built by his bitter rival Borromini. It is said that in the 17th century, when the two artists animated the city of Rome with their styles, there was no shortage of pricks and teasing, in fact the facades of the two buildings were decorated with donkey ears and other symbols of mockery aimed at the counterpart, this until the Pope decided to clean up the facades and bring order to his city.

Third stop
Leaving behind Via di Propaganda Fide and the two palaces, we arrive in front of another famous monument, the Column of the Immaculate Conception, a dogma established on December 6, 1854 by Pope Pius IX. It seems that the pope missed the inauguration of the monument but the Roman population does not seem to be affected too much as the pope was believed to be a jettatore (a person bearer of bad luck). A few steps from the Column of the Immaculate Conception it is possible to reach Piazza di Spagna, with its famous staircase and the Fontana della Barcaccia.

The Fontana della Barcaccia is one of the first works of Gian Lorenzo Bernini, performed together with his father Pietro. The fountain is hollowed into the street level probably to solve the problem of the low pressure of the Acqua Vergine Aqueduct in this area (the same one that serves the Trevi Fountain and the Four Rivers Fountain).

In front of the Barcaccia fountain, there are the famous Spanish Steps which, despite its name, were built thanks to French funding to connect the Spanish Embassy to the the Trinity Church dei Monti. The staircase consists of 136 steps and is decorated during the spring period with many flowers, especially azaleas.

From Piazza di Spagna it is possible to continue either along Via dei Condotti (famous for its high fashion boutiques) or along via del Babbuino, which owes its name to one of the talking statues of Rome, or up towards Piazza del Popolo, where one of the many obelisks that characterize the eternal city is clearly visible; did you know that Rome is the city with the largest number of obelisks in the world, more than any city in Egypt? 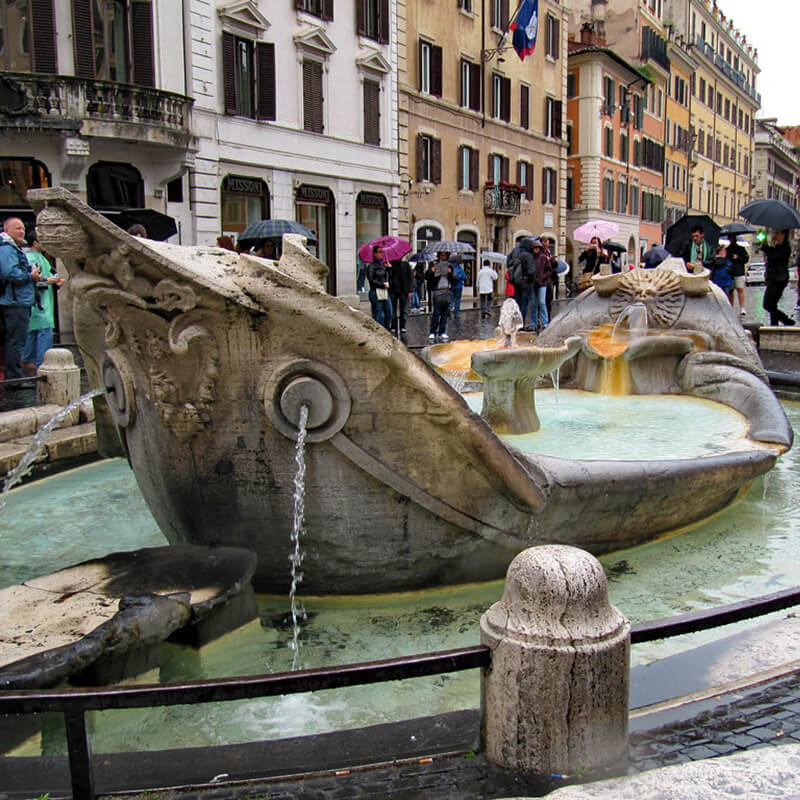 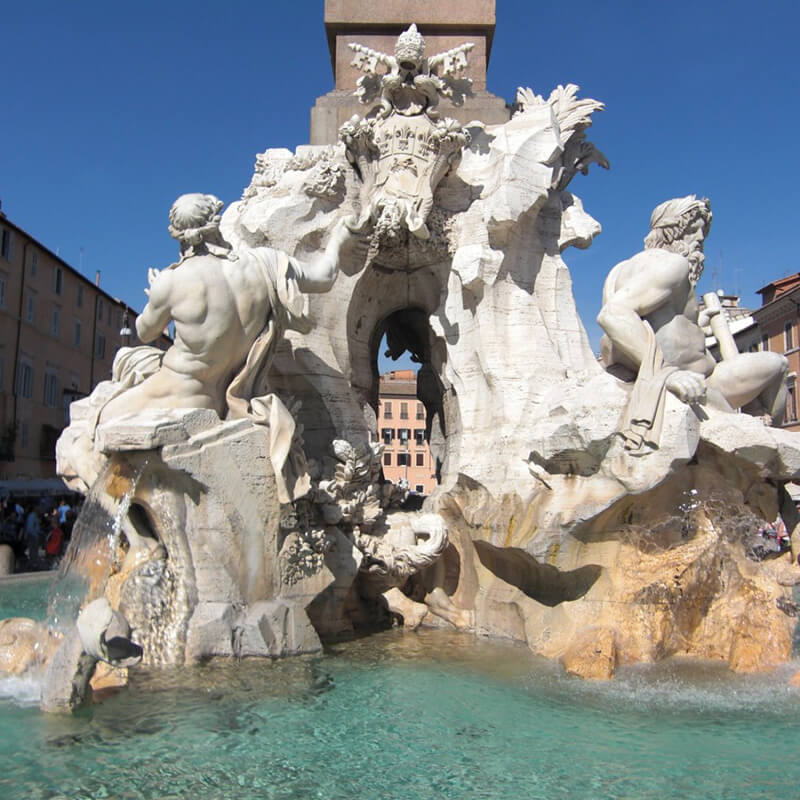 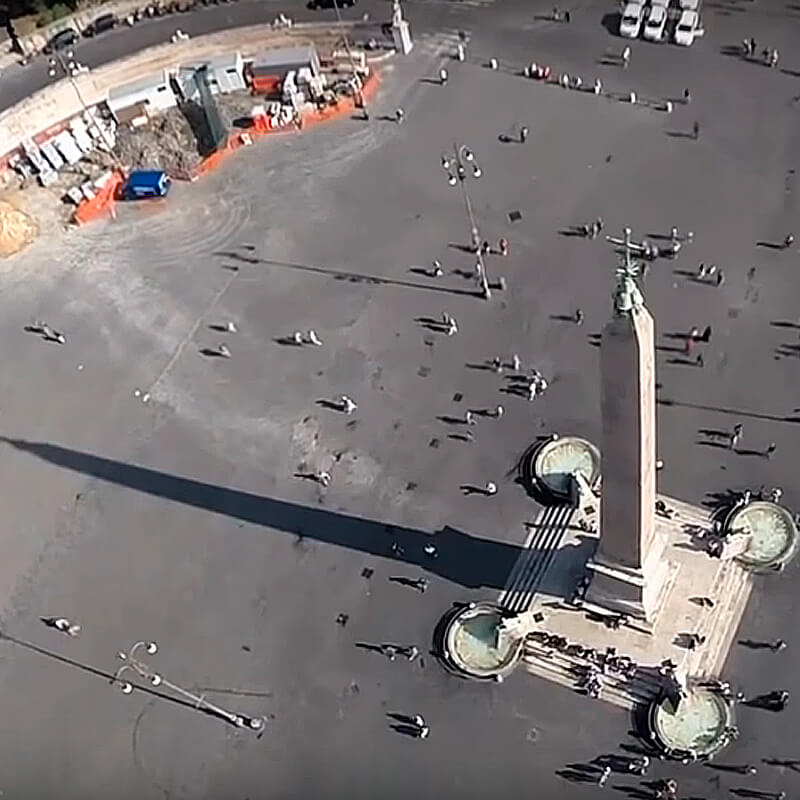 Fourth stop
Continuing along Via dei Condotti you will cross Via del Corso, which takes this name for the Berber horse race that was organized every year during the Roman Carnival, a very dangerous race that could recall the running of the bulls in Pamplona, but in this case the protagonists were Berber horses (from North Africa).

Continuing along Via del Corso you will come to cross Piazza Colonna, which takes its name from the historiated column dedicated to the wars waged by Marcus Aurelius in Germany, similar to another column that you can find along via dei Fori imperiali. This square is not only famous for this column but because it is possible to see two buildings connected to the power of the Italian Republic, we are talking about Palazzo Chigi, seat of the Prime Minister and Montecitorio, seat of the Chamber of Deputies.

Leaving behind Palazzo Chigi and Montecitorio we will be able to meet another very suggestive place, the remains of the Hadrianeum, a temple dedicated to the Emperor Hadrian today used as the seat of the Rome Chamber of Commerce. Continuing our walk we’ll find on the right side of Via del Corso the Temple of Hadrian we will find ourselves in Piazza In Pietra, a square that seems to be built like a wing of a theater; in front of us the monumental Church of Sant’Ignazio Lyola will materialize, famous because it contains an internal dome that does not actually exist.

Fifth stop
Leaving the Church of Sant’Ignazio da Loyola you cannot fail to notice a long road where you can recognize even in the distance the portico of a famous Roman temple which today is one of the many churches in Rome, The Church of Santa Maria dei Martiri or more simply the Pantheon. This church hosts a very special celebration, which you can experience if you visit Rome in the period of Pentecost: a cascade of red rose petals from the oculos opening of its roof dome. The Pantheon is today the tomb of important personalities of all times such as 2 of the 4 kings of Italy (Vittorio Emanuele II and Umberto I), but also of Queen Margherita, Raphael and other artists of all times and art.

In the surroundings of the Pantheon you can take a pleasant break in one of the historic cafes such as Sant’Eustachio or the Coppa d’oro, or make a small detour to see another famous work by Gian Lorenzo Bernini, the Pucin della Minerva. Pucin literally means pig, even if it is an elephant. There is a nice anecdote related to this work; it is said that the artist, angered by the constant interference and modifications on his own project by the friars of the convent of Santa Maria sopra Minerva, decided to create the statue of the elephant that showed his back to the convent as a sign of contempt or simply out of spite.

Sixth stop
Leaving behind the Pantheon and Bernini’s “spiteful” elephant, we will walk along another famous “palace of power”, Palazzo Madama , the seat of the Senate of the Italian Republic. In front of this famous palace, if you are passionate about Baroque art, you can make a visit to the Church of San Luigi dei Francesi, which contains three paintings by Caravaggio, the Vocation of St. Matthew , St. Matthew and the Angel , and the Martyrdom of St. Matthew . These three canvases give us the opportunity to relive the atmosphere of the alleys of the Eternal City and its fashions in the late 1500s and early 1600s.

Leaving behind Palazzo Madama and the church of San Luigi dei Francesi we arrive at Piazza Navona, another famous square in Rome, characterized by three fountains, even if the most famous is certainly the central one, the Fountain of the Four Rivers. The fountain is the work of Bernini and here too “according to legend” another clash took place between the two eternal rivals, Bernini and Borromini. In fact, it is said that some of the statues in their poses want to conceal mockery of the work of Borromini, who participated in the construction of the Church of Sant’Agnese in Agone placed in front of the Fountain of the Four Rivers. This funny anecdote, however, does not correspond to the truth, given that the construction of the current church by Borromini was only begun after the fountain was completed. Furthermore, few know that Piazza Navona was born from the remains of an ancient Roman stadium, the Stadium of Domitian, and used to be entirely filled up with water to showcase real life naval battles.

From Piazza Navona, if you still have time, you can continue your tour towards the Vatican and Trastevere, or towards Campo dei Fiori and the Jewish Ghetto. And if in the meantime you want a guided tour for a more insightful exploration and a tour of Rome’s famous squares, fountains and palaces, or if you want to explore Rome with one of my popular guided tours in Rome, or a custom itineraries tailored to your interests, you can contact me directly for info and tour reservations. 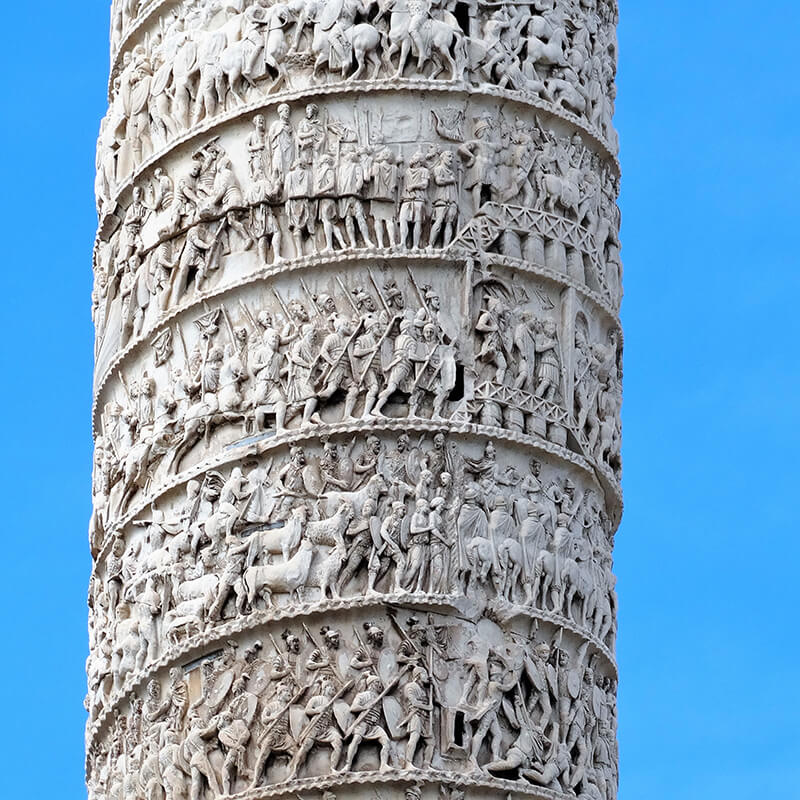 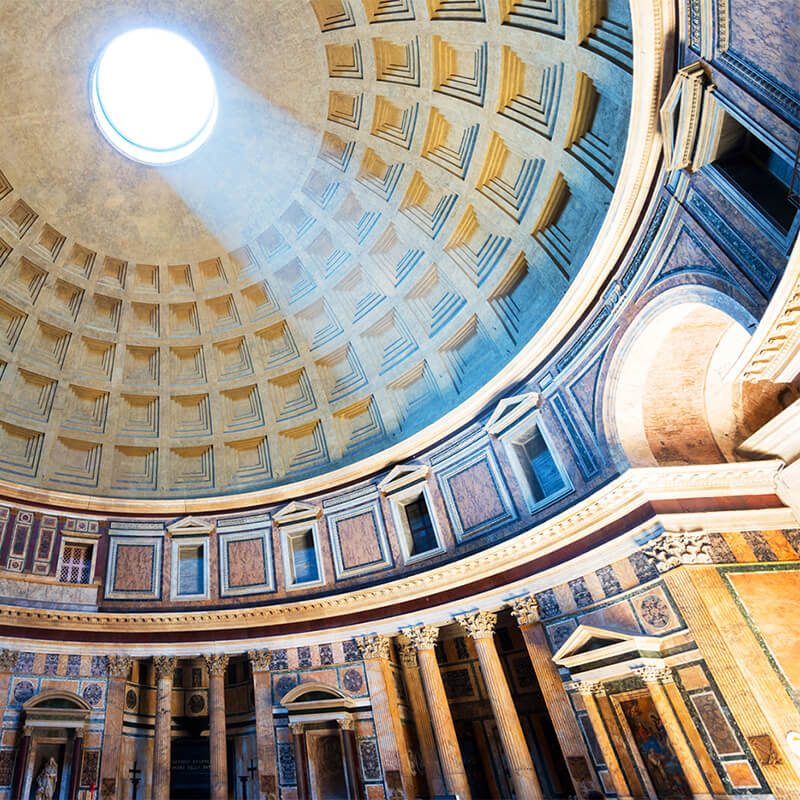 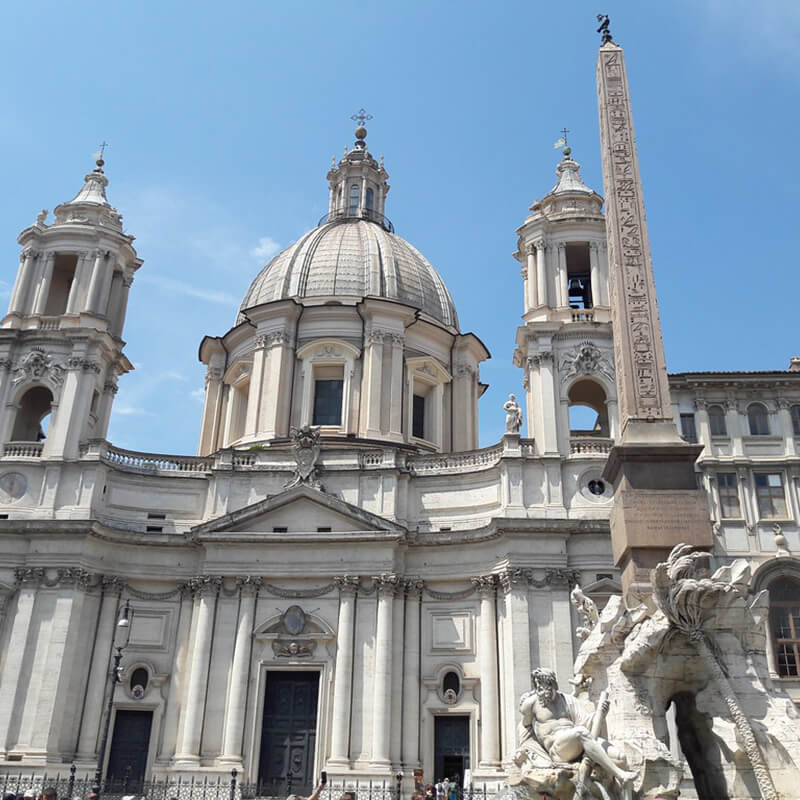